A Conversation with Ed Lu

A Conversation with Ed Lu

An Exploration of Failure and Leadership

At our second Beach Club Roundtable session we were delighted to welcome Ed Lu – an astrophysicist and astronaut. Having spent 206 days in space over three missions for NASA he went on to work for large organisations such as Google and Space-X, before co-founding LeoLabs, a company that provides orbital tracking and collision avoidance services for satellite operators.  He is also the Executive Director of the B612 Foundation Asteroid Institute, a non-profit organisation whose goal is to predict and prevent catastrophic asteroid impacts on Earth.

During our discussion, we explored perspectives around failure, leadership and the need for transparency, how to unlock innovation at pace within different types of organisations and the importance and impact of establishing and sharing a clear long-term purpose and vision.

The definition of failure varies greatly between organisations. Some determine success as a whole by the outcome of a final test, whereas some use tests as an opportunity to collect data and experiment. Ed emphasises the importance of ongoing experimentation, there is no such thing as a “failed test” as long as data is collected. Tests are seen as a step in the process of learning what works and what doesn’t. Even if a test ends in unexpected outcomes or malfunctions, something can be learned from it, so progress is made.

In every organisation, there is a place for processes and regulations, and in traditional companies, they can be rigid. Within companies that are struggling to move quickly, there is often a reliance on processes rather than doing what needs to be done to allow the company to progress and evolve. Ed suggests that in order to drive transformation and execute at pace, businesses may need to unlearn these fixed processes and allow for flexibility and experimentation in order to adapt and find more effective ways to proceed.

A long-term goal can be a crucial factor in the speed and success of an organisation as it helps everyone involved to understand the processes and decisions taken as parts of a journey. It can also centralise focus, tying everyone into the vision of the organisation and creating urgency and passion to meet the goal as a team.

Those who are able to navigate the usual uncertainty of today will be those who can also revaluate the goal when things change. Evolution in an organisation has proved challenging; however, once it became necessary many have coped well and adapted quickly to a new way of working. The sense of urgency and a clear goal has driven decisive action.

The importance of leadership transparency has been made particularly apparent in the recent crisis, with leaders in a continuous pattern of re-evaluating and adjusting to cope with the pandemic and the continuously evolving external landscape. When decisions are taken and new guidance issued without an explanation, people are left asking why. Having a clear vision that is easily articulated by leadership makes it easier for everyone involved to get on board and engage fully. Without this transparency, confusion and a lack of trust are formed.

Ed discussed how it is common for engineers only one or two years out of college to be tasked with making decisions, because they are closest, and have the best understanding of the system. Data rather than hierarchy drives evidence-based decision-making, and teams closest to the project itself are empowered to make decisions bringing trust and a sense of ownership, engaging everyone in the organisation in the long-term vision.

We were joined by a diverse group from multiple industries who shared some great observations and asked many fantastic questions. As always the time flew by but we were left with some incredibly useful insights reaffirming that now more than ever is the time for companies to re-establish and re-engage their employees around a clear purpose and goal, embrace experimentation as part of their DNA, and keep testing and learning (from failure as well as success) as the key to moving with pace and agility and leapfrogging the competition.

We have a strict door policy at our boxset premier. To gain access to this limited edition boxset, simply fill in the form below.

Astronaut Edward Lu is a respected scientist, technologist, consultant and speaker.  He’s seen amazing stuff and he’s going to talk to us about it and more!

He is a co-founder of LeoLabs, a company that provides orbital tracking and collision avoidance services for satellite operators.  He is also the Executive Director of the B612 Foundation Asteroid Institute, a non-profit organisation whose goal is to predict and prevent catastrophic asteroid impacts on Earth.

Ed provides advice and guidance to leaders in business and government on complex technical issues, scientific and technology trends and long term strategic planning.  He also serves as an advisor to several entrepreneurial companies in Silicon Valley. He is a highly sought-after  speaker and has given talks around the world on innovation, technology, space, and energy.

Prior to Google, Ed had a distinguished twelve-year career as a NASA Astronaut.  He flew on three space missions logging over 206 days in space.  In 2003 with just nine weeks of training, he earned the distinction of being the First American to launch as the Flight Engineer on a Russian Soyuz spacecraft.  He became part of the first two-person skeleton crew to live aboard the International Space Station for six months. Ed received numerous commendations for his space service including NASA’s highest honour; the Distinguished Service Medal.

Ed lives in Silicon Valley and is writing a book about his 6-month stay aboard the International Space Station.  Ed joined us at our very first event in 2013  and so much has happened since then we are delighted to welcome him back. 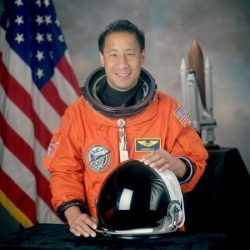