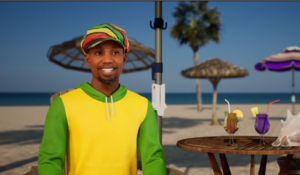 The Metahumans are coming!

Metahumans? many ask me … well yes! During our Monsters on the Beach experience this past November we were serenaded by a metahuman called Solomon. He sang an updated version of the Bob Marley classic with the words “no meta, no cry” from his virtual Jamaican beach in a metaverse. He is a manifestation of Ugandan born singer and storyteller Solomon Jagwe who is exploring the new technology available to create realistic online avatars and the possibilities that offers him as an artist.

The timing was apt. Just days before Facebook rebranded as Meta Platforms Inc. and revealed plans to join the likes of Google and Apple in developing new metahuman and metauniverse products. The promotional video for Facebook’s rebrand to Meta included a glimpse into the Facebook metaverse showing founder and CEO Mark Zuckerberg with friends and colleagues floating around in a virtual futuristic world.

The word meta comes from ancient Greek and as a prefix has several meanings. Most relevant are where it signifies a change of position or condition as you’d find in “metamorphosis” or it can denote something of a higher or second-order kind such as in “metalanguage”.

During the pandemic online work meetings and social events became normal. Everything from AGMs to job interviews, quizzes to cocktail parties were held virtually. A metaverse with avatars is just a more exciting and engaging environment from a Zoom call and it doesn’t matter if you’re wearing your pyjamas. Your metahuman can represent you as fully clothed.

In many ways the metaverse is the next generation of the internet, a 3D virtual world where people are represented by their metahuman avatars who can then interact in real time with everything, and everyone, in this virtual universe.

Pundits predict metahumans will increasingly participate in activities like shopping, gaming and learning in a metaverse setting. And obviously, it will continue to be used as a working and collaboration environment. Microsoft is expected to launch Mesh in 2022 which will incorporate virtual experiences directly into Microsoft Teams.

One sector uniquely suited to a metaverse forum is entertainment. And in 2022 Swedish pop legends Abba will take to the stage in London for ‘live’ concerts. The foursome have been painstakingly recreated with the latest wizardry in their 1979 prime and will appear as 3D digital creations that have already inevitably been dubbed “Abbatars”.

Soloman told us how he is already experimenting with storytelling as a metahuman especially when communicating with young ones on the autistic spectrum. It’s easy to see how his smiling, friendly metahuman persona is relatable and appealing to kids and even Zuckerberg in the Facebook metaverse has a playful, almost childlike appearance.

Other metahuman creations are less enchanting. Epic’s Unreal Engine offers much more realistic and sophisticated avatars. They say of the free tool: “MetaHuman Creator is a cloud-based app that empowers anyone to create photorealistic digital humans, fully rigged and complete with hair and clothing, in minutes.” Some of the examples they have showcased are frighteningly realistic and rugged.

The metahuman technology means that there is potential to resurrect long dead Hollywood stars to the silver screen once more. Integrations with artificial intelligence (AI) and machine learning can create metahumans that have no longer or never existed. Sometimes called a ‘deepfake’, one ghoulish example is a Grammy-award winning simulated video of a President Richard Nixon avatar that had been taught how to speak in his manner. This metahuman delivered the ghoulish speech that was written just in case Neil Armstrong and Buzz Aldrin died on the surface of the moon in 1969.

Second Life is widely regarded as the pioneer and that’s been operating as a metaverse platform for 20 years. But to many people developing and enjoying a metahuman persona seems both bizarre and remote. But the technology is reaching far ahead and as more of us do develop a virtual avatar for the metaverse, let’s hope we use it for creativity, education fun and positivity.

Inviting Solomon to join us on our virtual PurpleBeach, was truly groundbreaking and we are exploring future collaborations with him in the real … and metaverse … so do WATCH THIS SPACE!